Robotics is a prominent topic in modern space missions. The use of automated systems allows to achieve complex tasks with less human interaction, either from astronauts or ground control. Consequently, costs and risks are reduced as well as time lags and other inefficiencies. This is true for a wide range of space missions: from planetary observation/exploration and Earth sciences to orbital testing and technology demonstration. In addition, On-Orbit Servicing (OOS) missions rely heavily on robotics and a large number of mission concepts imply the use of  manipulators or other automated systems. Research in robotics focused recently on the use of new approaches aiming to expand the field of application of existing systems. Soft robotics studies the possibility to exploit deformable materials or control algorithms to obtain innovative systems with improved operational flexibility. Compared to traditional robotics, in which the manipulators are composed by rigid links and position-controlled joints, a major advantage of soft robotics is the compliance to external environment which allows a safer interaction with brittle targets or humans, and eases the operation in an unpredicted environment. This quality can be achieved by means of sophisticated control systems or by implementing robots based on soft materials and structures. A large number of actuator solutions based on smart materials (i.e. shape memory alloys and polymers, piezoelectric crystals 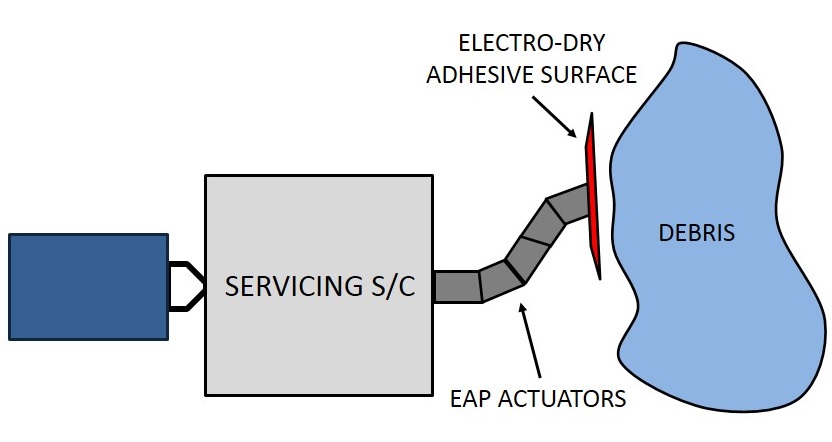 and polymers, etc.) have been proposed recently, many of them being inspired by biological systems; in particular, several solutions exploit the capabilities of Electro-Active Polymers (EAP) and, more specifically, of the promising Dielectric Elastomers (DE). Some space applications of smart materials at different levels of technology readiness exist. The implementation of soft robotic systems in a space scenario can provide key abilities for the realization of a variety of missions thanks to their intrinsic adaptability to the target object. The capture and manipulation of an orbital object are complex tasks with a large number of uncertain parameters including mass and dynamic properties of the system. The typical scenario of an OOS mission can be partially unknown since the target objects characteristics can be different from the original at the beginning of operational life (e.g. structural damages, fuel depletion, malfunctioning). In order to safely approach and operate on such vehicles it is necessary to develop tolerant systems that can comply with the actual operative situation. For this reason the development of robust and flexible soft robotics systems can enable several new scenarios, with great potentialities in increasing the efficiency of space exploitation.

Dielectric Elastomers (DE) are a pretty popular class of EAPs, whose exploitation is based on a very simple working principle. The most commonly used materials are either silicones or acrylic elastomers. DEs come in membranes (originally 0.5 – 1 mm in thickness) which show a high dielectric constant, thus performing well as insulators. Such membranes undergo an equi-biaxially pre-stretch process in order to impose a positive tensile state in the plane of the material and to further reduce thickness down to 1-10 µm. The material is than turned into a deformable capacitor by applying compliant electrodes on both sides of the membrane. Carbon grease or graphite powder can be used as electrode materials. The elastomer works as dielectric layer inside the capacitor. If a high-voltage load is applied across the membrane to the deformable electrodes, compressive Maxwell’s forces arise and squeeze the dielectric membrane, reducing its thickness and increasing its area. With an appropriate design, the this deformation can be exploited to obtain a useful actuation, even along multiple degrees-of-freedom (DoF). 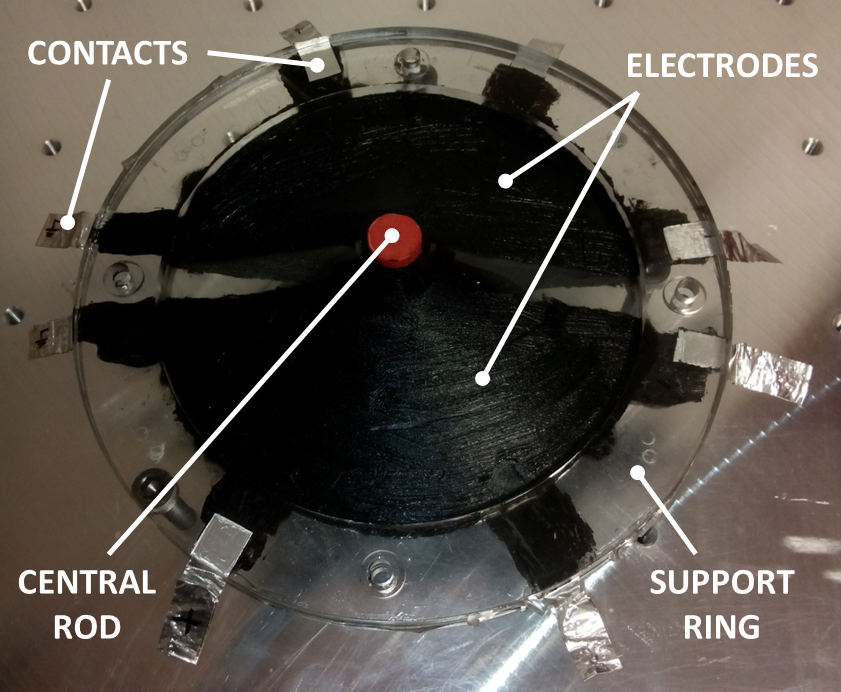 Over the last years, SSG has focused on the design and development of  Dielectric Elastomer Actuators. Beside the spring-roll linear actuators proposed by POLARIS, conic actuators have been developed and tested. In particular, the double-cone configuration has been selected for its simplicity and multi-DoF design. The actuator is composed by two circular pre-stretched membranes, fixed to rigid support rings, deformed to cone shape by a rigid rod and, finally, mounted one mirrored to the other. The electric contact with the compliant electrodes is obtained by means of aluminum tape.

The selected configuration has 3 DoF (two rotational and one translational). A detailed modelling of the actuators have been performed and empirical relations / transfer functions have been developed in order to assess the steady-state, transient and frequency response of the devices with variable design parameters and  under different voltage loads. A deep understanding of force/torque and deformation vs voltage and time relations has been achieved. 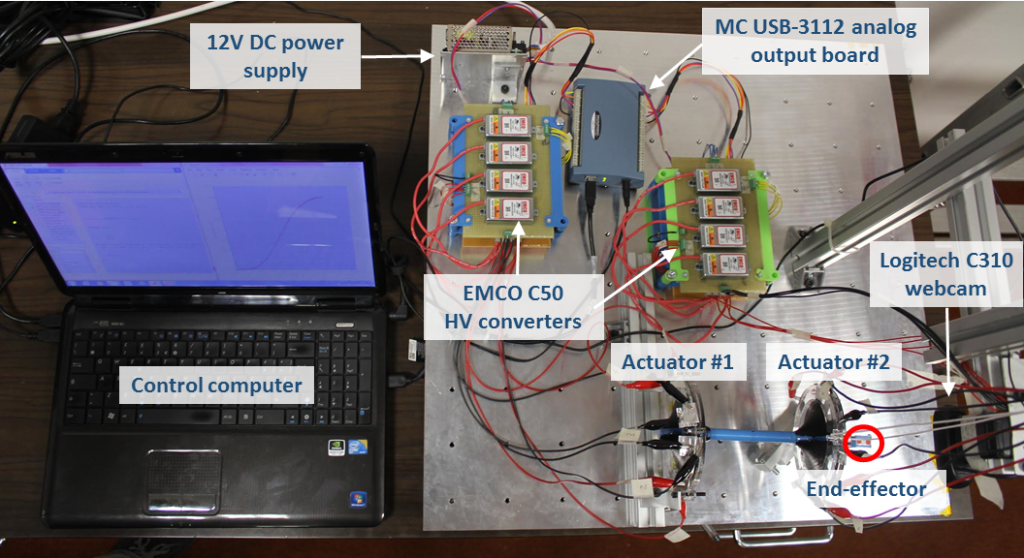 A redundant robotic arm based on two double-cone DEAs has been developed and a prototype has been assembled and tested. The selected configuration is planar and composed by two actuators mounted in series. This design was chosen aiming to ease the realization of a laboratory experiment with simulated zero-gravity conditions. The manipulator has four Joint Variables (JV), while the end-effector has three DoF (X and Y position, orientation) two of whom are controlled (position), leading to two degrees of redundancy. The first actuator is fixed to ground at the outer support ring, while the connection between the two actuators is between the central rods. The end-effector marker is held by a light structure attached to the second actuator outer ring. The manipulator redundancy is exploited to avoid joint limits by minimizing joint variables and, consequently, joint torques and command voltages.

For further information on DEAs please feel free to contact Francesco Branz with the form below. Thank you!