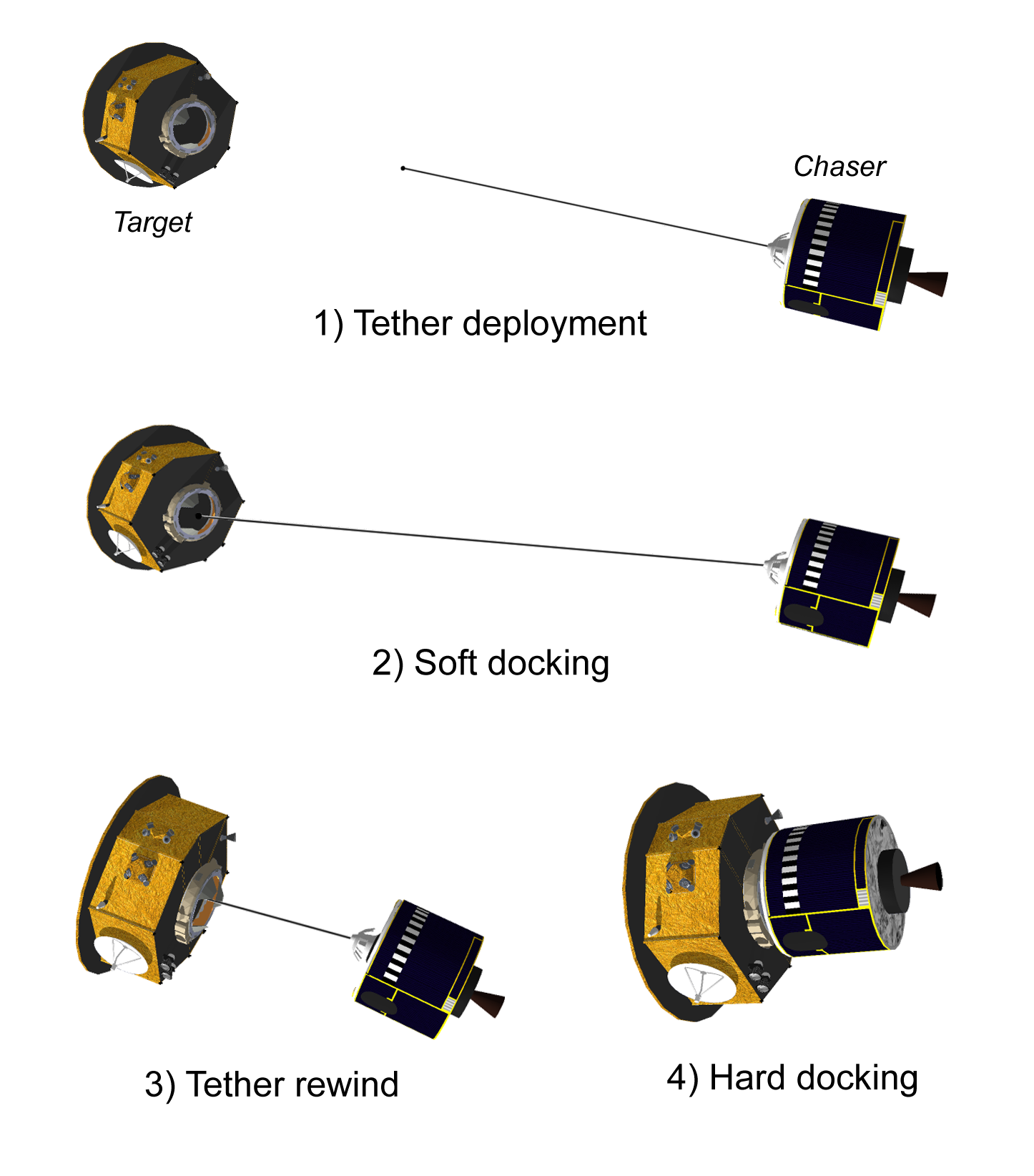 State-of-the-art docking strategies involve rigid connection between two space vehicles. These technologies are quite well known and ensure structural rigidity. However, due to the high performance control requirements involved and the impossibility to operate a live feed control from ground, missions that involve small automated vehicles cannot take advantage of such manoeuvre concept. Moreover, technologies like robotic arms and gender-mate mechanisms require large and massive structures, precluding their implementation on small spacecraft systems.

SSG is developing a new concept of docking mechanism, based on a tethered technology, aiming to reduce pointing and proximity navigation requirements, besides simplifying the docking operations. The concept of the system consists in an electromagnetic device, whose aim is to realise the connection between a probe and the target spacecraft.  The probe is connected to the chaser by a tether, which is deployed towards the target. Once the probe is captured by the target, the docking manoeuvre takes place by simply rewinding the tether. This system takes advantage of a Retrievable Reel System technology, which controls deployment and retrieval of the tether. The first prototype of this docking system concept was tested in the framework of the FELDs experiment.

A further development of this novel docking strategy is represented by the application of two electromagnetic interfaces: a tethered electromagnetic probe is ejected by the chaser toward a receiving electromagnetic interface mounted on the target spacecraft. The generated magnetic field drives the probe to the target and realizes an automatic alignment and soft docking between the two interfaces, thus reducing the proximity navigation and guidance requirements as well as fuel consumption necessary for them. After the achievement of soft docking, the tether provides a low stiffness connection between the two spacecraft, thus greatly reducing forces transfer. The tether finally allows to safely mate chaser and target simply by rewinding it, after the two-bodies dynamics has been stabilized.

A preliminary complete numerical analysis of the RVD procedure is already available, simulating a real scenario and the mutual interactions between the chaser and the target during all the phases of the operation. The two docking interfaces are modeled as magnetic dipoles and bodies dynamics are described in terms of spacecraft position and attitude through the implementation of a far/mid magnetic field model. The realization of an experimental setup is also in program to verify the reliability of the numerical model used for the study, including a Helmholtz cage to simulate Earth magnetic field.

The advantages of the new concept will contribute to enable a large number of future on-orbit servicing missions; in particular, it will be possible to execute joining operations even between small satellites, despite of their limited resources.

For further information on Tethered Soft Docking please feel free to contact Matteo Duzzi with the form below, thank you!